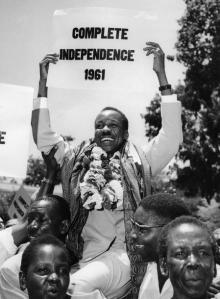 J.K. Nyerere on independence of Tanganyika

Tanzania’s history is as old as the history of mankind. Since the discovery of the remains and footprints of what is believed to be the nearest kin to mankind- homo habilis (Zinjanthropus) and homo sapiens - in 1959 and 1979 in the Olduvai Gorge and Laetoli Footprints respectively, within the world-famous Ngorongoro Crater by the late Dr. Louis Leakey and his wife, the country has been considered as the cradle of mankind.

Over the past 2000 years, the country has seen various influences on its population beginning with Phoenicians, Persian/Arab merchants, Portuguese explorers, slave traders from various parts of the world and finally colonizers. Tanzania has been a scene of colonization wars between major European powers and struggles for independence.

Arab merchants established settlements along the country’s coast as early as the 7th/8th century. These were followed by the Portuguese in the 16th century who were taken-over by the Omanis in the 17th century. The short reign of the Portuguese resulted in the coming of European missionaries and explorers beginning in the late 18th century after which the Germans took over the mainland and gave it the name “Deutsche Ost Afrika” while Zanzibar became a British protectorate under the Agreement with the Oman Sultan. When Britain conquered Germany at the end of the First World War, the mainland was ruled by Her Majesty’s reign and renamed to Tanganyika.

Britain continued administering the country as a UN Trusteeship Territory until 1961 when Tanganyika achieved her independence under the late Mwalimu Julius Kambarage Nyerere. Following the Revolution on Zanzibar island led by Abeid Amani Karume in January 1964, the two merged in April the same year to form the United Republic of Tanzania.

Tanganyika African National Union (TANU) the Party that won the independence of Tanganyika in 1961, ruled the country until 1977 when it merged with the Afro-Shiraz Party to form the Chama Cha Mapinduzi (CCM). Tanzania had a single-party political system until 1995 when the first multiparty elections were held in Tanzania